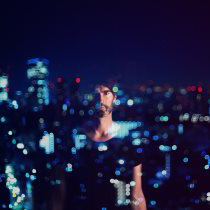 THE MICRONAUT is a one-man orchestra. Tracks narrating with no need for speech, resembling a collage of electronica, samples, and live guitar. The guitar sets the point of departure: riffs evolve and are passed to synthesizer keys, note by n..

German multi-instrumentalist and producer The Micronaut (Stefan Streck) is back with his third and to date most powerful full-length album ‚Forms‘ (release date December, 9th 2016).

This record will be released on Acker Records, one of Germany’s leading independent electronic labels. “Forms or shapes can be seen everywhere” Streck says, and so it´s no surprise that his floating music has been described as a melting pot of sounds. This record reveals yet unheard new perspectives on music genres, crushing their boundaries in a very playful way. Since his first album release in 2012, Micronauts´ profile is constantly on the rise. With his broken bass rhythms, catchy melodies and stomping straightness, charismatic Stefan Streck is one of the hardest working beat-makers in Germany, playing around 100 shows each year, doing remixes and still finding the time to release his own music. “When it comes to composing music I never think in genres whatsoever. Instead I try to create music that I think touches people on different levels and I am my own biggest critic. I produce not always a track. I collect ideas“, Streck says and so the atmosphere of his productions evolves from a multitude of intricate elements – it´s a synergy of the organic and the synthetic. The 12 vastly-touching tracks on ‚Forms‘ are a mix of Electronica, IDM and Pop, a fluttering, heady explosion of colourful pop with a melancholic edge of plaintive clarity. Germany has been known for the quality of electronic music for quite some time and the Leipzig based musician known as The Micronaut is yet more proof for this.